Following the recent reopening of DMR Manchester, David M Robinson (DMR) was thrilled to host the England Netball team in ‘The Lounge’ ahead of the start of the Netball World Cup. Taking place in DMR’s spiritual home of Liverpool, the tournament will see teams from across the world descend on the city, to compete at the M&S Bank Arena.

During the visit, each of the team’s twelve players were presented with a TAG Heuer ‘Aquaracer’ timepiece, along with a personalised DMR jewellery case. Inspired by the Roses’ team slogan, each case was individually engraved with the phrase ‘If we are in it, then we are in it to win it’.

Each piece was individually shaped to the players wrists following a masterclass with DMR’s master watchmakers, who instructed each of the ladies on the way in which to set and care for their timepiece.

Thanks to a relationship forged through the long-standing friendship of DMR’s managing director, John Robinson and England Netball coach Tracey Neville, the visit follows a number of other sporting commitments for the brand, this year.

This latest friendship reaffirms David M Robinson’s commitment to supporting grass roots sports and the involvement of young men and women in these, during its 50th anniversary year.

John Robinson, managing director said: “We understand that in sport, timing really is everything. It was this knowledge that inspired our gifts for you all.

“Having attended so many games recently with my family, I have seen the way that my own children have been inspired by your skill and dedication, which makes today so special.”

“As DMR celebrates its 50th anniversary, this year’s Netball World Cup is hosted by the city in which the brand was founded, Liverpool, DMR wishes the whole of the England netball team all of the best for the upcoming tournament”. 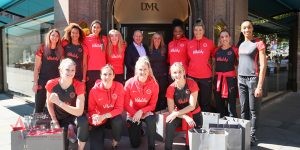